To celebrate being awarded the freedom of the City, a prestigious event to commemorate the accolade granted to Catherine Zeta-Jones, was laid on at Swanseas Majestic Brangwyn Hall. This special event featured stories, anecdotes and tales of Catherines early Mumbles life through to her award-winning career.

Accompanied by her Hollywood Husband Michael Douglas and her son Dylan, the packed out event were led through a myriad of stories from Catherine’s early days in variety clubs, right through to her Oscar winning performance and Dazzling Hollywood career.

With video messages from Sir David Jason amongst others, and performances from Only Men Aloud, Ria Jones as well as the wonderful band The Wurlitzers, the organisers JR Events called upon Total Sound Solutions for additional AV and P.A. support. We provided 3 projectors including our 20k lumen panasonic along with screens, cameras and operators to ensure that every guest in this vast hall, had an excellent view no matter where they were sat.

For sound, we provided and operated our NEXO M10 system backed up with MS15 Bins and NX 4X2 amps. Due to the different type of performers, speakers and playback on the night, it was vital that we used a system that allowed for flexibility and that could cope with each different portion of the night. The NEXO system sounded amazing on the night and our team of engineers really brought out the best in this tried and tested system. If only Catherine could visit every year. 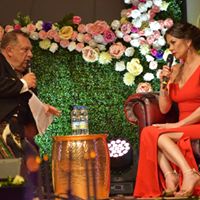